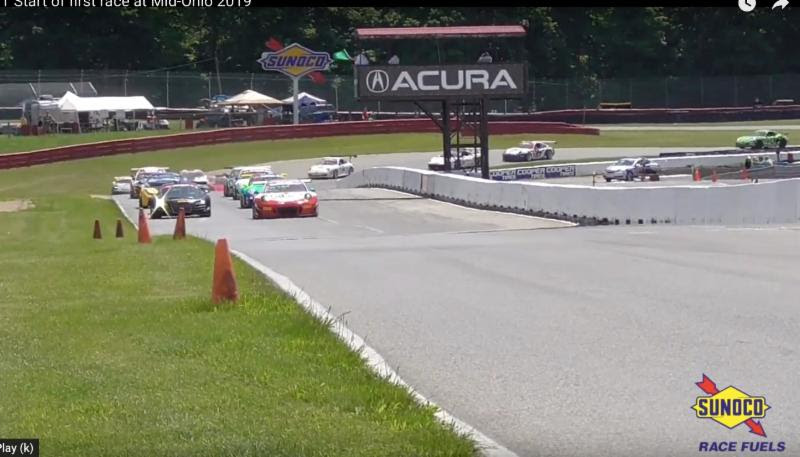 Click on the photo above to watch a terrific start from the first sprint race at Mid Ohio. Racing throughout the field was filled with exciting battles all weekend.

The rainy season cleared for the racy season at the Mid Ohio Sports Car Course for Round 5 of the 2019 International GT Championship. Stuttgart Cup, Mission Foods GT3 Cup Trophy and Maranello Cup groups featured full grids of competitive racing. The Ohio natives were out in full force for bragging rights to this mid-season classic. MARK SANDRIDGE in his #58 Porsche GT3 R made it a clean sweep for overall wins in Ohio, teaming with JOE VARDE for the enduro, but not before being challenged by new comer KEN THWAITS in an Audi R8 GT3 and the always competitive TOM PANK in his Ultra Performance #42 Porsche. Sandridge would be joined by fellow Ohioan JOHN HIGGINS in the 4 liter class to fill the podium throughout the weekend.

Thirteen Ohio residents filled the entry list with many of them standing on the podium. ROBERT WISEN made it a hat trick with three wins in the Mission Foods GT 3.8 liter class, but felt the pressure from LUKAS PANK, CHIP VANCE, BRIAN HICKS and CHRIS HAEHN. Robert remained on the top step as the others rotated around him from sprint to enduro.

It was the same story in the Mission Foods 3.6 liter class as a Buckeye clash continued. 2018 Mission Foods GT3 Champion ED BAUS racing for Demon Speed, traded places on track and on the podium with TODD (Spin to Win) SLOAN, BRAD WAITE and BRANT GIERE. 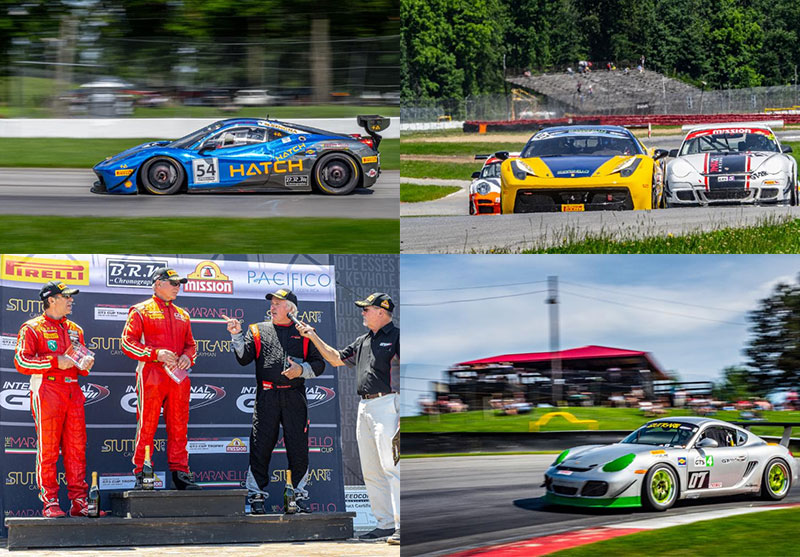 The Maranello Cup was a story of the great white north supported by Accell Racing, bringing a very competitive group from Canada. ROB METKA, in his beautiful #54 blue 458, was first to top the field with a win in sprint race 1, while BENOIT BERGERON moved up to win sprint race 2 and the lone star from Texas, COLIN COHEN teamed with JASON HART, in his Norwood Auto Italia Ferrari to take first in class and second overall in the enduro. Fellow Canadians NICK FERRARO and GABOR FOIT challenged BEN JOHNSTON and SEB COPPOLA for the final podium places during the weekend.

The Stuttgart Cup stayed with the competitive Ohio theme for the group of Porsche Caymans. Newcomer MIKE WARD defended the top spot all weekend while WILL WACHS and series regular CAMERON MCINTRYE would fight for second and third.

Track entertainment changed to a paddock party as Sandridge Foods /Grandma’s Salads hosted a Friday night BBQ. The best of ribs, chicken and salads were prepared by the Sandridge Family. Many thanks to Mark Sandridge and family for the fun, food and hospitality. 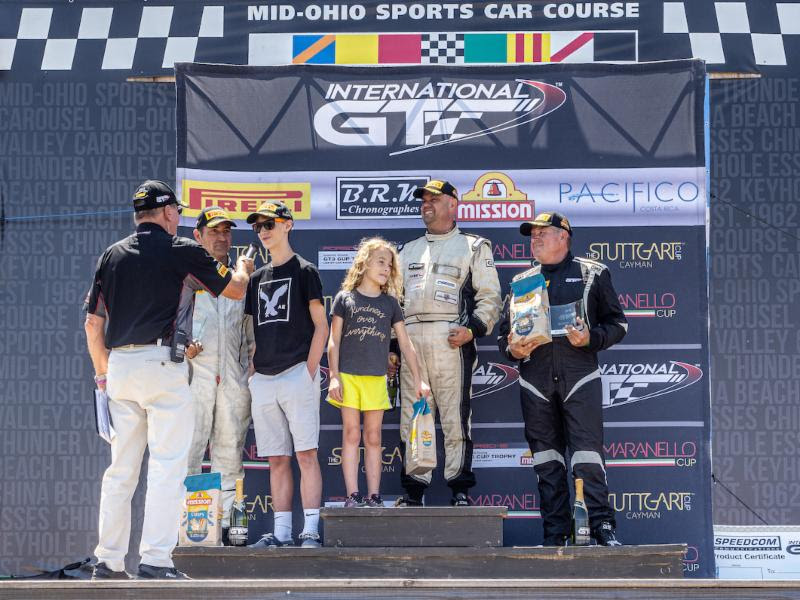 While racing is our job, reaching out to the others is International GT’s mission. Through the “Drive It Forward” campaign we’ve contributed monies to children’s charities throughout the year. At Mid Ohio we honored one brave teenager who has lived through more than most to become a thriver and great motorsports fan. Series regular TODD SLOAN arranged for our special fan Rollie Torkarski to be a guest of the series for the weekend. Rollie enjoyed a pace car ride in sprint race 1 and his well deserved spot on the podium with Sloan. Thanks to Rollie and his family for supporting JMax Racing and helping to make it a great day.

Enjoy a happy and safe Independence Day weekend and join us for the kick off to the second half of the 2019 International GT season at Watkins Glen in September. Click on the WGI logo above to register. 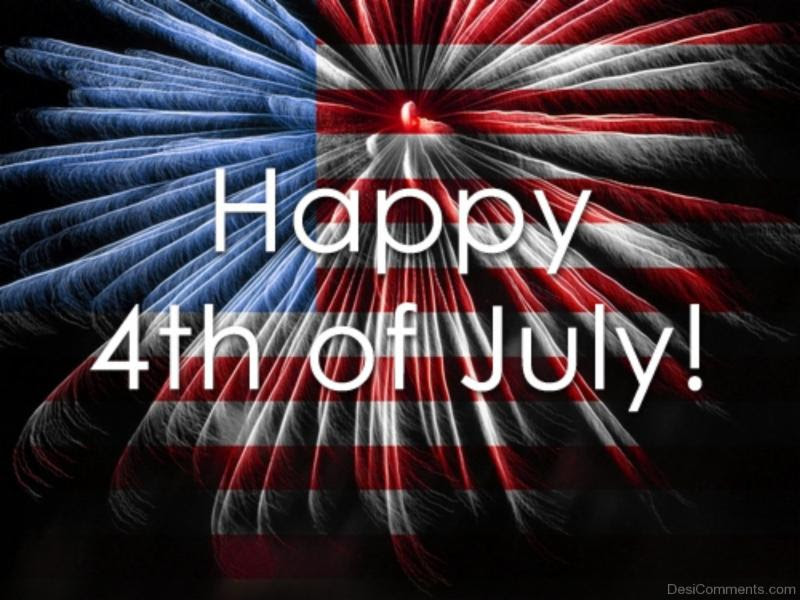 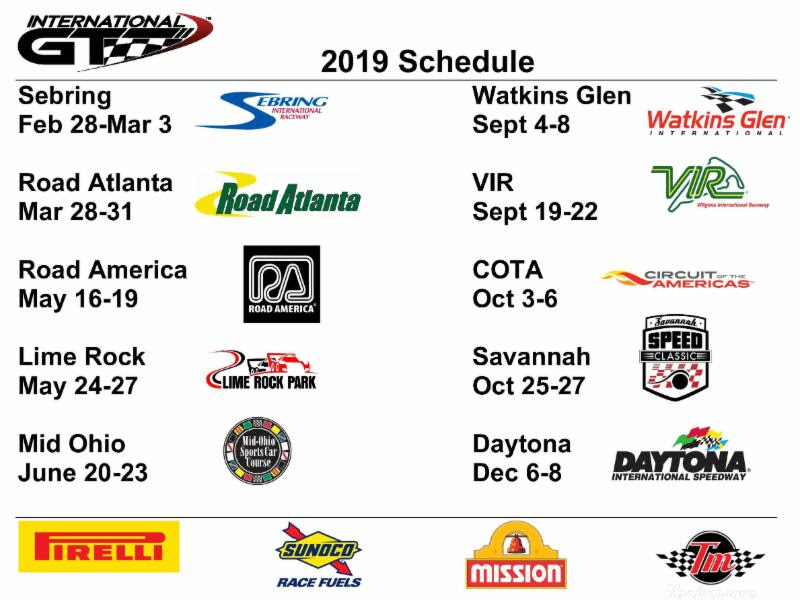